History of the Owners

Jerry opened his first place in 1972 in Colon, MI called “The Magic Carpet” (Colon being the magic capital of the world ) offering casual dining specializing in prime rib with entertainment of all kinds including an assortment of magic acts. Ten years later he would open his second place in 1982 with the help of Carrol Forrieder, “CJ’’s” in White Pigeon, MI. Their seating capacity doubled to about three hundred. Jerry along with Carrol opened and closed the restaurant seven days a week. CJ’S kept Jerry’s original prime rib recipe and added the biggest seafood buffet the area had ever seen, going through more than a hundred and fifty pounds of seafood a week, Frog legs and Crab legs being the bulk.

After four years of no time off, they opened their third place up in Three Rivers, MI “The Fisher Lake Inn”. Cutting his seating capacity in half, to give his customers the right amount of attention along with the beautiful view of Fisher Lake Jerry and Carroll thought they might settle down here. After rebuilding the old fisher lake tavern, molding the place into a quaint, casual, restaurant Jerry thought it might be time for a break. His son, Jeff decided to join the business in 1991 and has been helping with day to day operations ever since, learning from the ground up. Today you can see Jerry and Carrol between the months of June and December, enjoying south Florida otherwise. However, Jeff you can usually always bump into, if you make your way to the destination point called FISHER LAKE INN. 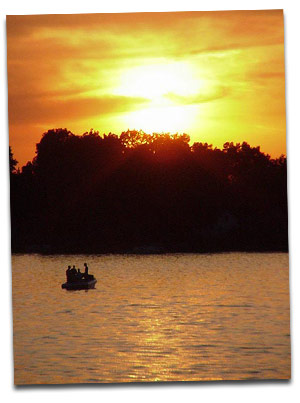